Maroc Telecom maintains its leadership in mobile services within the Kingdom of Morocco and its clear superiority over other networks such as Inwi and Orange, according to a report released by Opensignal, a global company specializing in analyzing and measuring the mobile network experience for the month of September 2021. 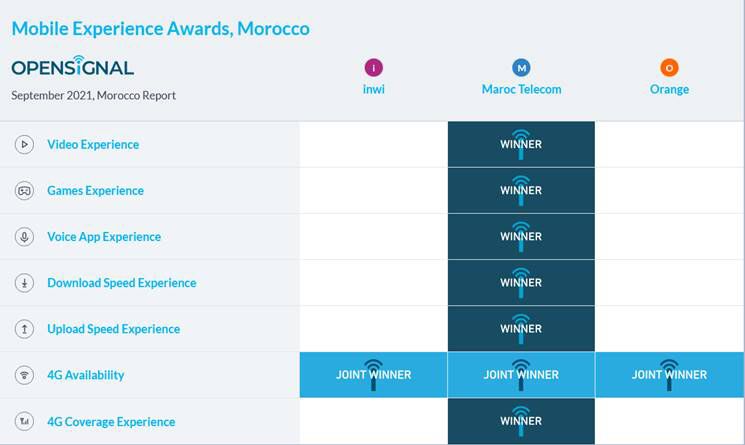 According to “OpenSignal,” Maroc Telecom remains the dominant telecom company in Morocco in the field of mobile services, outperforming the competition in video, gaming, and voice applications, and it also outperforms the competition in download speed (34.5 Mbps), while not exceeding Inwi and Orange speed (17.5 Mbps) in the download service.

In addition to its dominance in the spread of its 4G coverage throughout Morocco, Maroc Telecom exceeds the two businesses in the download speed experience, with 10.1 Mbps, and it shares the superiority in delivering 4G service to Moroccan clients with Inwi and Orange.

These analyses and measurements by “OpenSignal” reveal Maroc Telecom’s continued success in winning the bet to provide more and stronger services to Moroccan customers in the field of mobile phones, a field that has seen a significant increase in recent years as the use of the Internet by mobile phones in Morocco has risen to around 29 million subscribers.

Leila Benali: “Morocco is aiming to consolidate regional integration in Africa in…