Telegraph: Moroccan “drones” have rewritten the regulations in the Sahara, “Polisario” fighters had given up hope in the face of political failures 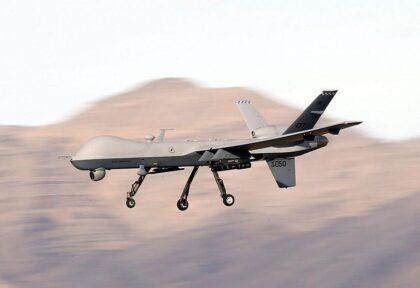 After many failures confronted by the figureheads of the “Polisario” at the political level regarding the conflict with Morocco over the Sahara, the British newspaper “The Telegraph” said in a field report completed in areas where “Polisario Front” elements are present in the Algerian Sahara, that a state of despair is sweeping the fighters of the front.
As per statements to the Telegraph by a number of the Front’s fighters, the international community “did not do justice to them,” and the Front was unable to achieve anything in the Sahara issue, so the vexing question for the “Polisario” elements on the front lines of the fighting has become, “How will we liberate the desert?” with most of them seeing no choice but to go to war.
In this context, Bashir Mustafa, a 69-year-old Polisario combatant and former Front Command counselor, remarked that “the Polisario must advance to the next stage,” adding that “this time the conflict requires continuity and more strong escalation.”
Other elements of the “Polisario” Front fighters have stated that they have no other options and that the “liberation of the Sahara” will only come through war, despite the fact that they are aware of the difficulty and differences this time from previous wars in the desert between the “Polisario” and the forces.
The deployment of drones by Morocco led the “Polisario” components to adapt their approach in encounters with Moroccan forces, according to the British publication, as they moved randomly in small groups like nomads in the desert.
According to a British publication, one of the ways that Polisario forces dodge the lethal bombing of Moroccan “drones” after leaving the Algerian desert and entering the buffer zone is to travel through the desert at night in Toyota trucks with the lights turned off. Completely, as well as covering the dashboard with rubber stickers so that the “drone” cannot detect them while flying through the sky.
Despite the precautions taken by “Polisario” elements while moving through the buffer zone in order to approach the Moroccan security wall in order to carry out bombing operations against Moroccan forces, the constant anticipation and constant monitoring of the sky for fear of “drones” bombarding them does not stop their constant anticipation and constant monitoring of the sky.
This, as well as the fact that a military commander of the “Polisario,” Mohamed Fadel, spoke to the Spanish newspaper “Publico” and revealed that the current war with Morocco is different from previous conflicts, noting that Morocco now has “drones” that have become the worst nightmares for those suffering from separatist front elements.
According to the same spokesman, he was wounded by Moroccan forces in the 1980s, and he was wounded a second time last April, after he and other Polisario members carried out a targeting operation near the Moroccan security wall, but on the way back to the camps, a Moroccan “drone” caught up with them and launched air missiles.
The same official said that a missile hit near him, gravely wounded him, and that in the same Moroccan strike, separatist commander Dah Al-Bandir, who was a leader of the front’s so-called “Sahrawi gendarmerie” and one of the Polisario’s important leaders, was murdered.
According to the Spanish newspaper “Publico,” the military “drones” that Morocco has acquired have become the Polisario elements’ worst nightmares because they are not seen or heard, appear and disappear quickly, and launch missiles directly, causing the militias to become “Obsessive” and start staring at the sky after any operation they perform.

The Moroccanness of the Sahara never was – and never…