Boujdour stands out on 45th Anniversary of the Green March.

Various activities organized by the governor of Boujdour city.

PoliticsSociety
By Badi Ouidad On Nov 7, 2020 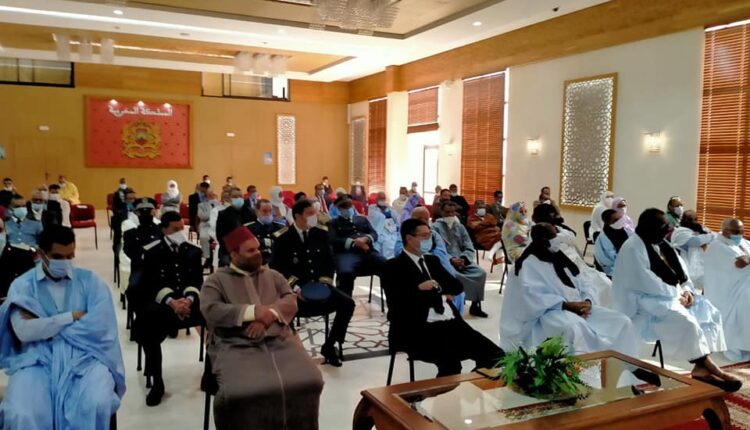 On the occasion of the forty-fifth anniversary of the Green March, this morning, Friday, November 6, 2020. The Governor of Boujdour, Ibrahim Ibn Ibrahim, presided over the ceremony to salute the national flag in the courtyard of the province headquarters.

The Salute of the Flag ceremony was attended by the head of the regional council, Ahmed Khayar, the region’s parliament members and a number of those elected, military and police officials, decision makers, heads of foreign affairs, as well as civil society activists.

On the occasion commemorating the succession of His Majesty King Mohammed VI to the throne of his blessed predecessors, a group of armed forces performed a parade in which they saluted the national flag.

After that, the regional president presided over the speech festival, on the occasion of the forty-fifth anniversary of the glorious Green March, which was organized by the Regional Prosecutor of the High Commissioner for the Resistance and members of the Liberation Army in Boujdour, in a large workers’ meeting room in the region in coordination and cooperation and support of the Regional Council of Boujdour.

The provincial president, Ibrahim Ibn Ibrahim, and his accompanying delegation also supervised, on the same occasion, the delivery of para-medical supplies and equipment for the benefit of the blood filtering center at the regional hospital.  6 machines for blood prescribing at an estimated cost of 720,000 dirhams as a contribution from the National Initiative for Human Development to accompany and help patients with renal insufficiency and alleviate their suffering, in addition to 280,000 dirhams for medicines and para-medical equipment’s necessary for this category of patients.

Washington: human rights at the heart of a meeting between the State Department and a…

Washington: human rights at the heart of a meeting between the State…

Morocco and Sudan discuss partnership perspectives in the mining…

Washington: human rights at the heart of a meeting between…